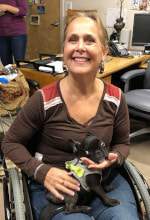 President
Susan Manning owned the Feed Barn Country Store with her husband John for over 20 years. They are now retired, and Susan spends as much time as she can volunteering for A-PAL and Tri County Wildlife Care. She has been President of A-PAL for 16 years and focuses on two main goals: reducing the number of shelter intakes and increasing shelter save rates. The Feed Barn donates space to A-PAL for operations, which includes feeding, caring and providing space for 300-500 cats and kittens up for adoption annually. 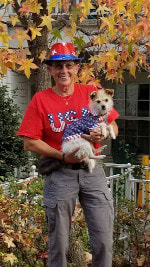 Vice President
Margaret “Marge`” Blair is Vice President of A-PAL and owner of Twin Cedar K9 located east of Jackson. The goal of the Second Chance Program is to “train and rehabilitate” shelter dogs that stand little chance of being adopted because of behavioral problems.  These dogs are pulled from Amador County Animal Control, Calaveras Animal Control and sometimes from Stockton's city animal shelter.  Once in the Second Chance Program, the dogs are evaluated and then trained and socialized with the help of a team of volunteers.  Once we feel they are adoptable, we promote them on local media and take them to adoption outreach programs.  Since the inception of the program, we have saved and homed more than 238 dogs that more than likely would have been euthanized.  To read more about the program and see photos and stories of happy graduates, go to WWW.TwinCedarK9.com. 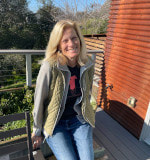 Secretary
Lisa Peterson joined the board of A-Pal in early 2020.  She has been a steady volunteer with the Amador County Animal Control and Adoption Center for almost 10 years.  She is a dog walker, chairman of the shelter’s Promotions Committee and a member of Rusty’s Fund for Shelter Animals. Prior to retirement, she was a paralegal and performed office management and administration with  law, biotech and consulting firms.  She has been a full-time resident of Amador County since 2013.

Treasurer
Joan Martin joined A-PAL in 1999 after relocating to Amador County from the Bay Area.  Her love of animals led her to volunteer her time and accounting expertise to A-PAL as Treasurer.  She assisted Kathy Schmidt in starting the Save the Kittens Program as the first foster mom.  After taking a hiatus, Joan returned to A-PAL as Co-Treasurer to Sally Trestrail.  She is proud to be part of this progressive organization, which has done so much to save the lives of domestic animals in Amador County.  Joan and her husband share their lives with two giant dogs and four cats.
Board of Directors 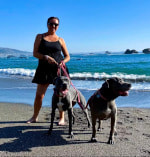 Director of Publicity and Marketing
April Marie Hancock started with A-PAL  in January of 2013 and began taking photographs of adoptable cats and kittens to share on social media as a member of the "Kitty Committee."  Later in the year, she joined the board of directors as Director of Publicity and Marketing. including responsibility for social media.  April Marie is also a small mammal wildlife rehabber with Tri County Wildlife Care. Her love for all animals, wild and domestic, has driven her pursuits in animal rescue.​.

Director
Wendy Robles moved to Amador County in 1992 after growing up in Calaveras. She works as a customer service representative in the Jackson office of AAA part time, allowing her to continue her work with Amador Hospice.  She’s been an animal lover her entire life, caring for her own horses, dogs and cats as a child, raising and showing pigs in her local 4-H, and supporting the Calaveras County Fair. Since marrying and moving to Amador, attending “Strut your Mutt” was only the beginning.  Pretty soon she was asked to ‘help out,"  and she has never stopped.  Recognizing the importance of spaying and neutering pets was only part of what made her want to support A-PAL Humane Society.  Being a part of something that is truly making a difference to the welfare of animals and helping the community she lives in makes it all worthwhile.