In 2014, the newly formed PawsPartners organized a committee to promote the individual efforts of A-PAL, Tri County Wildlife Care, Second Chance Dog Rescue, Amador County Animal Control & Adoption Center (ACAC & AC) and Amador County Animal Response Team (ACART), with the goal of heightening the experience and the care of both domestic and wild animals in our area.

The Shelter Partners Newsletter was launched to encourage adoptions at the animal shelter, spotlight its innovative operation, and dispel the sad image of past county “kill shelters.” All Shelter Partners Newsletters of the past 8 years are collected HERE , but we wanted to feature some favorite PET TAILS; stories of inspiring, unusual, and successful adoptions from ACAC & AC. The READ MORE link will redirect you to the top of the Newsletter where they originally appeared. Scroll down to the black PET TAIL section to view the whole story. 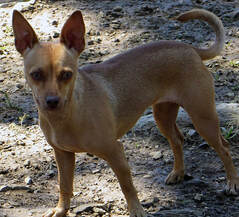 PIPPA was not being noticed at the shelter because she was so shy. She hid from anyone who approached her kennel. Potential adopters found her cowering in a corner. It was decided she was a good candidate for training with one of our Paws Partners, Twin Cedar K9 Second Chance Dog Rescue. Read More 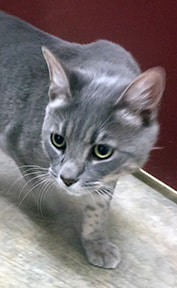 THOMAS O'MALLEY: well worth the effort

Found in Sutter Creek and turned in to the shelter as a stray, the staff discovered right away that he had bowel problems. He wasn't defecating on his own, so medications were given to him to help ease the problem. When that didn't pan out, he was taken to Dr. Alison Pillsbury, who did a full workup on Thomas, finding an old injury to his pelvis and bowel. She felt that, if he had a section of bowel removed surgically, he might be able to process his food in a more regular way. Read More 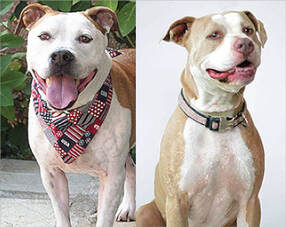 DOUGLAS and KATIE arrived separately (within weeks of each other) at our shelter, but they ended up sharing the undesirable distinction of being long-timers here. So long, in fact, that the staff and volunteers were beginning to lose hope that anyone would ever notice how charming they were. READ MORE 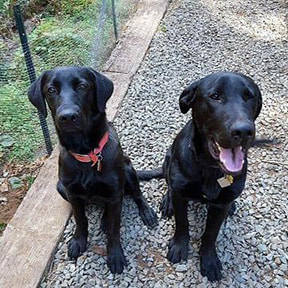 Best Friends
WILLIE & SHARLEE: one is good, two is better

Barbara and Chad Malonson were searching for a new puppy to join their family. Luckily for everyone involved, they directed their search to our Adoption Center.

Willie, a gangly 10-month-old black lab mix immediately caught their eye on the ACAC Web page. At first, they were disappointed to learn that he was not available until some health issues could be resolved.  They anxiously followed his progress. Read More 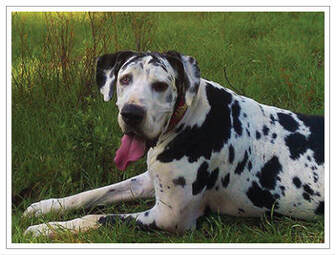 MERLOT, a harlequin Great Dane, landed in our shelter unwanted, underweight, and heartworm-positive. Barbara Walther, ACAC & AC's rescue coordinator, arranged for her to go to the East Bay SPCA, where she was ultimately adopted by its President and CEO, Allison Lundquist.
Read More 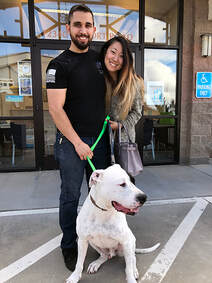 A BEST FRIEND fashioned from the discarded tissues of a shelter dog.
Well, it's happened. Moo Moo (aka Moose) has found his forever home. Before securing his place in this new and extra-special family unit, Moo Moo: Read More 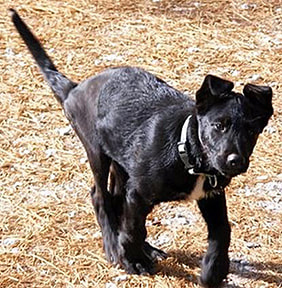 One Tuesday afternoon I was at the shelter to walk the dogs on my shift when Andrea and Kelly asked me to meet Cal, a pup who needed fostering. He had arrived with an injury, and had just had surgery to repair his femur. Cal needed to be exercised, gently and regularly, or he would not heal properly. Calvin's difficulties were not yet over, though.  Read More 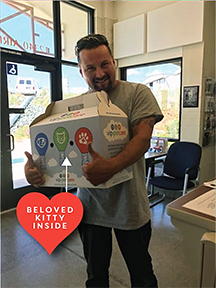 Last summer, an adult cat was captured as a stray and brought in to ACAC & AC. She was a mess of burrs and tangles, indicating that she had been on her own for a while. Strays are routinely scanned for microchips when they first arrive, and so it was with this newcomer. Her chip revealed a contact phone number from the S.F. Bay Area. The owner, it turns out, had been searching in vain for his beloved pet for six weeks. How she ended up 150-odd miles away in Amador County is anybody's guess. Needless to say, her owner was overjoyed to hear from us and picked her up the next morning.

Lucky kitty, lucky owner, thanks to a tiny chip that said it all. Read More 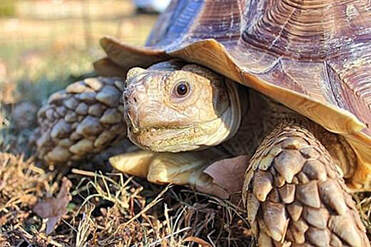 Like any animal shelter, we occasionally get unusual animals, but two tortoises in two years equals one for the record books. TONKA ambled our way a couple of summers ago. He was a 100 lb. African Sulcata, phoned in as a stray. When his owner came to reclaim him, she reported that he was a recidivist runaway, even from his spacious, tortoise-friendly habitat. “Runaway” is not a word that springs to mind when we think of giant, slow-moving reptiles, but apparently, the African Sulcata has a reputation for this sort of thing. Read More 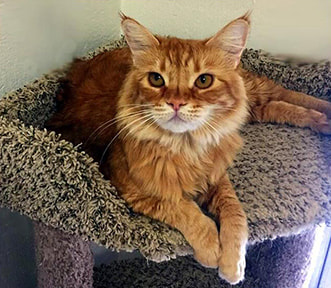 Every so often, ACAC & AC has to take an unconventional approach to ensure an animal’s outcome will be the best possible. Vanessa came to us as a young adult cat with recurring upper respiratory difficulties. She was being treated, but would suffer a setback every time a new batch of felines with respiratory issues came in to the cat rooms, which is to say, continually. Read More 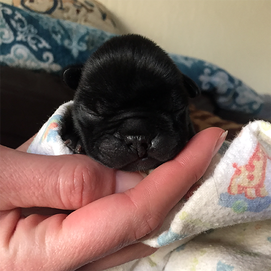 Working and volunteering at the county animal shelter has its challenges. Often, these can be downright discouraging for those devoted to the well-being of animals. Naturally, we love to share stories of success and extraordinary kindness as often as possible. Here comes one now. Read More

Back in mid-April, a young Shepherd/Malinois mix arrived at the ACAC shelter as a stray. He and an even younger companion were found wandering along the road. He was alert, highly athletic, and not surprisingly, a bit of a handful. Because the Malinois is often too driven to make a desirable family pet, it was decided he would be a worthy candidate for one of the breed-specific rescue groups the shelter frequently coordinates with.

The Jefferson Working Dog Rescue in Southern Oregon reached out to ACAC, and arrangements were made to meet with their representatives near the Sacramento airport. Happily, he turned out to be a great fit for them, and was put into training to become a working dog for the Oregon State Police.

They have named him “Amador”, and once his training is complete, he will be living and patrolling with his partner, working the I-5 corridor in Southern Oregon as a contraband sniffing dog. Way to go, Amador, Jefferson Working Dog Rescue, and Amador County Animal Control and Adoption Center. Congratulations, all!