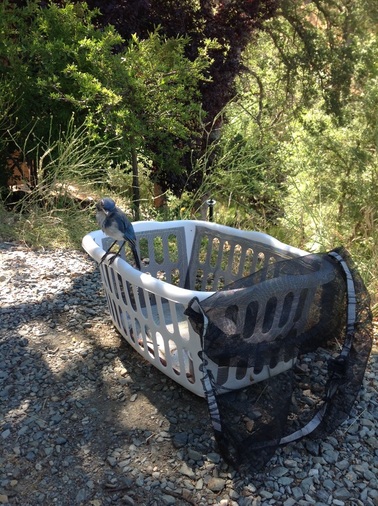 Anita found a small scrub Jay that had fallen out of its nest near her home. The nest was too flimsy to re-nest the Jay so she brought it to Tri County Wildlife Care where it received the care it needed. Poor little guy had fallen on his head which resulted in a bad headache and a severe twitch. Anita requested that he be brought back when it was time for release.

We paired him (or her) with another scrub Jay.  Together they spent almost two months growing into beautiful full-grown birds.

Next step was some time in a flight cage. Here they both learned the sites and sounds of the great outdoors and honed their flying skills. After several days, Anita's Jay improved and his head twitch was almost gone.

The day came for release. When I called, I told her her scrub Jay was ready to come home and that she would get a bonus...a second scrub Jay.

The release location was perfect, heavily treed, away from traffic and people.

Anita got the honor of release. She gently pulled back the mesh top and her scrub Jay popped out to sit on the side of the basket. The second one shortly flew out and landed just a short distance away.

Anita's bird took its time and surveyed its surroundings from the top of the basket. When ready, it flew two circles over the basket and landed in a large bush. From there it squawked and squawked until the second bird came over to join it. A short time later, the two of them flew to another nearby tree.

This is what we work for; it is our payday. And today, I had the privilege of witnessing the rescuer release her bird as well as its friend just a few feet away from the nest it came from and fly free.