Going off to College, the Wild Way

After weeks in rehabilitation at the Tri County Wildlife nursery, birds move to a flight cage to familiarize them with the wild outdoors and stretch their wings for flight. After a week or two the doors are opened and they fly free. Sometimes that last step takes a bit longer than expected.

The doors opened early in the morning on Day 1. Shortly thereafter, wren 1 flew on to the door, looked around and thought about going back in. But he/she got nervous about the landing and ended up flying to the south fence. This seems like the typical accidental fledge that most birds experience. After a brief spell, wren 1 took off for a nice flight but was soon chased by a hummingbird over the house, over the north fence and into an oak tree. One down, three to go.

Knowing from past experience that wrens can take a long time to leave the flight cage, I went back into the house to tend to the morning chores.  The yard is safe from stray cats so the only wild things are other songbirds and the B52 bombers we call hummingbirds.

Wren 2 left the flight cage and the immediate vicinity while I was indoors. I return outdoors about every 30 minutes to check on my little charges and see who remains. Two wrens remain.

Many visits later, I discover that only one remains in the flight cage and wren 3 is on the fence behind the cage looking a bit stressed at his/her expanded environment. Wren number 4 remains inside.

Mid-afternoon check and the flight cage inhabitants include two wrens and one blue-bellied lizard. I don't want the wrens leaving too late in the day, so the lizard is politely escorted out, the doors are closed and two wrens remain.

Once again, the doors are opened early in the morning for any wrens that might like to check out the neighborhood. A few visits later to the flight cage, I find one wren near the blueberries, and one wren inside.

A bit later, wren 4 is on the inner threshold but not quite ready to make the plunge, or flight. Wren 4 returns inside.

Late afternoon, day 2 score: 2 out in the big world and 2 in the flight cage as before. What will day 3 bring?

As major construction is occurring on the north side of the flight cage, the plan was to release the wrens Saturday morning so they would have two days to find their way and not have to be concerned with the construction. That plan obviously failed. It is now Monday, and I still have two wrens that have been enjoying their stay at the TCWC Avian Spa and Resort and have refused to leave.

Once again, the doors open. Once again, one wren comes out to explore the surroundings and one stays behind. By mid-afternoon the count in the cage was one wren and one lizard. This time the lizard left of his own accord and the door was closed again for the night with one wren safely inside.

The Wrens release, Day 4
Doors opened bright and early and before I could step away, wren 4 was out the door. The wren spent all day outside occasionally looking in the flight cage and never far from it but never going in. This night is the first night all four are out of the flight cage.

The Wrens release, Day 5
All four wrens are out in the wild. Two remain nearby having breakfast of the worms I leave out for them under the blueberries. Good luck little wrens.

With these four out in the wild, it is time to move on. There are four house sparrows waiting to move in.

Tri County Wildlife Care, a local nonprofit started in 1994, is dedicated to the rescue and rehabilitation of our native wildlife and helping our community live in balance with wildlife. They envision a world where wildlife and people thrive together. For more information call (209) 283-3245, or visit pawspartners.org. 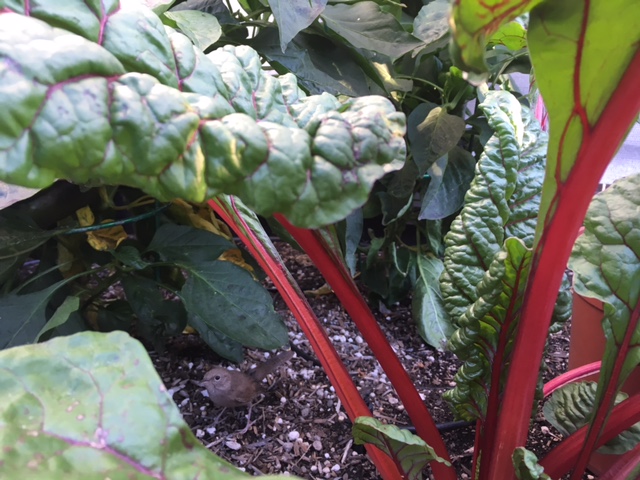