The Twins - by Bruce Whiteman 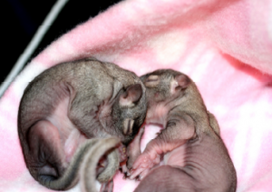 I began volunteering at TCWC in 2007, after being introduced officially to Susan by my daughter, who briefly worked at the Feed Barn, although I’ve been a Feed Barn customer forever. I did this due to my lifelong connection with all sorts of critters, and my belief that the wildlife needs every chance they can get to survive in this world full of people. My first duty was to finish raising a young squirrel that was about half grown. It was a great pleasure to see the little guy happily running around in the trees after being released.

Having successfully completing my first rehab, I was naturally hooked. Next came the rabies shots – to help protect me from myself (my lack of fear of the animals).

In March of 2008, I received my first real squirrel challenge – the twins. They were very small, just beginning to get their fur and their eyes still clamped shut. Lots of missed sleep, feeding breaks at work, even went on vacation with us. At this point, my wife was still hesitant about the whole squirrel thing – until she saw the twins. It was love at first sight. Now she is just as much involved in raising them as I am. I also received a third squirrel to add to the fun, who was older and was just released back to the wild on May 10th. It sure helps to have an extra pair of hands at feeding time, now that they are big enough to terrorize us and everything around them! We now call feeding time the squirrel rodeo. It didn’t take long to figure out why squirrels are rarely made into pets.

I’m very happy to have the opportunity to participate in helping the wildlife, even if it is just a small part of a big need.

Hopefully, I will be able to give many more critters a second chance. 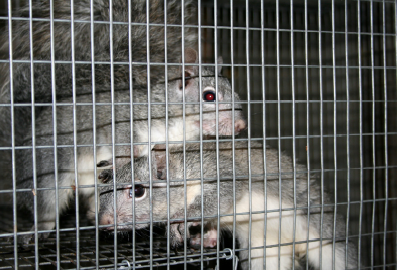